This week the State Water Resources Control Board issued a draft decision (PDF) approving a permit for a new water right granted to the City of Davis, the University of California at Davis, and the City of Woodland.  These entities currently rely on groundwater, but the quality is degraded and they would have to plunge ever deeper underground to access future supply.  They applied for a permit to obtain a surface water supply from the Sacramento River, which would help improve the quality of drinking water, improve reliability of supply, and reduce salt loads in wastewater effluent discharges.

The permit, which will be considered again by the State Board in March, combines two separate applications and authorizes use of a joint intake facility to divert a maximum of 45,000 acre-feet per year from the Sacramento River, at a combined thirty-day average rate of 80.1 cfs.  The water can be used for municipal, irrigation, fisheries, and aquaculture research purposes within Davis, UC Davis, and Woodland.

The draft decision approves the permit despite the prominent concern that California’s rivers and the Delta watershed are over-appropriated, leaving no water to spare for new water rights — particularly in light of the Delta flow criteria report, which suggested that higher flows dedicated to environmental purposes would be necessary to restore the Delta ecosystem.  Nonetheless, what this permit does not do is confer upon Davis and Woodland the right to a guaranteed 45,000 acre-feet each year.  The quantity of water that could be diverted is limited by the terms on which the permit is conditioned.

Is There Water to Spare?

The State Board can grant a new water right only if it determines that unappropriated water remains in the stream.  This can be a contentious point, because summing the face values of water rights suggests that California waters are indeed oversubscribed.  But this simplistic approach can be misleading as a way of describing how much water is consumptively used, and besides, water rights are fragile: The extent of the right, as represented on paper, often does not equal the quantity of water actually diverted on the ground.  This is just how the system is managed (or mismanaged, if you prefer).  Those who advocate for “paper water” to be better aligned with “wet water” will not be particularly pleased with the Davis-Woodland permit because it only exacerbates the problem.  While the face value of 45,000 acre-feet states the maximum quantity of water that could be diverted in a given year, it may not accurately represent actual diversions each year.

Different flow regimes were modeled, and the conclusion is that surplus water is available for Davis and Woodland.  But the amount and reliability of that supply depends on how the watershed is operated.

Davis and Woodland’s original analysis determined that water would not be available for appropriation whenever Term 91 is put into effect, but that there would be water available at other times.  Term 91 is a condition that the State Board puts in permits, requiring in-basin diverters to curtail their diversions at times when the state and federal projects have released water that needs to move through the whole system — for example, to meet Delta water quality objectives.  In the absence of Term 91, permit holders could simply undermine the operational scheme by intercepting water needed to fulfill some purpose downstream of them.  Davis and Woodland, as a junior water right holder on the Sacramento River, would be subject to Term 91 but could divert at other times.  The Davis-Woodland project would not on its own have a major effect, diverting 0.3 to 0.5 percent of stream flow: 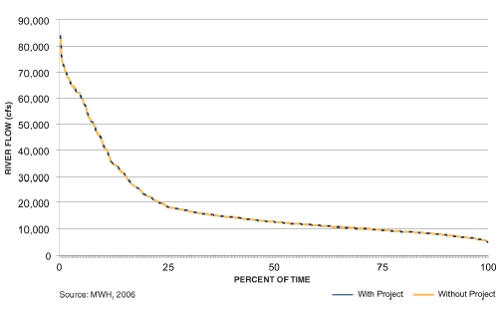 Sacramento River flow with and without the Davis-Woodland diversions. Courtesy of WDCWA.

Taken in combination with other foreseeable projects, however, the diversion could have a cumulatively significant effect on other factors, like the location of X2, which is correlated with delta smelt abundance.

The modeling analysis was later updated to study other operational assumptions.  For example, under the OCAP biological opinions (which Wanger is once again ordering to be revised), there is surplus water.  Except in some wet years, the available supply mostly falls short of the full 45,000 acre-feet.

Perhaps the most interesting thought-exercise is the Delta flow criteria report.  Even if these flows are implemented exactly as recommended in the report (which almost certainly will not happen), the model suggests that there would still be surplus water available in some years, particularly between December and March, although less than 45,000 acre-feet.  The flow criteria are non-binding and only informational at this stage, and the State Board is not using them to determine water rights.  At some point, though, the State Board will hold water rights hearings to allocate how users in the Delta watershed should share the responsibility of contributing additional flows to the environment.  That task, already monumentally difficult, is not made any easier by approving new permits.

Having determined that water is available, the draft decision approves the water right, keeping in mind some public interest considerations — the fact that the diversion will improve drinking water, while reducing salt loads and concentrations of selenium and boron in wastewater discharged into the Delta.

But there are also conditions placed on this water right.  As discussed above, Davis and Woodland are required to curtail diversions when Term 91 is in effect, but they also must be able to demonstrate that they have an alternative source of supply during these periods of time, such as water transfers with willing sellers in the Sacramento Valley.  Other permit terms give the State Board the flexibility to amend the permit in response to hydrologic conditions.  Davis and Woodland would also be required to install a fish screen on the intake, as well as implement mitigation measures that help maintain habitat and wetland buffers and avoid negative impacts to special status species.