Given that there is a salinity range physiologically tolerable to delta smelt — and a subset salinity range that is not just tolerable, but actually suitable, for which there is a higher probability of finding fish in practice — salinity is an important factor when determining how delta smelt is distributed throughout the estuary.  It certainly is not the only factor, as delta smelt may, for example, shift to a higher salinity range than they would ordinarily occupy to avoid toxins.  The Fall X2 action nonetheless seems like one natural way to use salinity to influence delta smelt distribution by directing them toward superior habitat.  Yet it is not news that the statistical link between X2 and delta smelt and other pelagic fishes has not always proven to be as strong as one might hope for a prominent water quality parameter, and Judge Wanger found it to be weak enough to grant an injunction, preventing the desired X2 location from being set to 74 km or any other point west of 79 km.  (The injunction has since been lifted; see below.)

The 2010 NRC report was careful to include a disclaimer that its analysis of the Delta has “no bearing” on the adequacy of the biological opinions.  Nonetheless, the report’s conclusions could hardly go unnoticed.  Indeed, in criticizing the value of X2, Wanger relied on the NRC’s observations that the justification for the Fall X2 action relies on a chain of correlations, where each correlative link introduces an additional level of uncertainty that may call into question whether it is logical to link the endpoints of the analytical chain:

X2 is also formulated in terms of the abiotic characteristic of salinity rather than biotic characteristics like predation.  Both are relevant, though Reclamation’s observation that abiotic characteristics are often “necessary preconditions” is credible.  In recent years, researchers have also worked on life cycle models that focus on other characteristics.  None of these life cycle models found smelt abundance to be correlated with X2, which shook Wanger’s confidence in the scientific basis underlying the Fall X2 action and played an important role in his decision to grant the injunction. (*)  But Wanger also recognized that each of the life cycle models “asks different questions using different tools and inputs, and each result has its strengths and weaknesses. This is a classic scientific dispute.”  (Wanger, at p. 54.)  So we have a proliferation of models and a larger bank of information, but little in the way of precise, definitive answers.  That might be enough to convince Wanger that the “balance of equities” demanded an injunction in this case, but it’s not enough to strike the more difficult path toward species recovery.

Given the current state of the science, it is not surprising that different models performing disjoint analyses and relying on different data sets would arrive at different conclusions about what indices are significant.  If the BiOp’s analysis is to be deemed flawed for focusing on abiotic factors, then the Maunder-Deriso life cycle model, for example, should likewise be deemed flawed for not taking into account autumn prey density and the importance of turbidity in creating a habitat setting that would allow delta smelt to thrive — two factors contributing to the choice of X2 as the prevailing regulatory regime.  Although the purpose of this litigation has been to scrutinize federal science, the various models appear to suffer from a similar underlying “flaw” — namely, that no model is able to prescribe a complete and scientifically certain solution to the precipitous decline of delta smelt in the past decade.  In all likelihood, many or all of the identified abiotic and biotic factors play a role at some time or place.  What the science cannot yet do is deliver a definitive and indisputable ranking of the most important factors.

Perhaps science cannot yet tell us with certainty what our priorities and recovery strategy should be in different water year types, at particular points in the year, or in different places.  Perhaps the science is messy, but should that fact be used as a means to slow the collection of additional data points that could help clean it up? Should the lack of a perfect ranking of priorities excuse us from trying to improve at least a couple important habitat features?  And in an estuarine system whose outflow and salinity levels appear stuck in a perpetual state of drought, all but ceasing to reflect variability between wet and dry years, how can one properly know the manner in which delta smelt will respond over time to bona fide wet years unless they are provided with the flow and salinity cues they expect to see in wet years?

Fortunately, California’s reservoirs are in good shape this year, and in fact, as of the time of this writing, the Fall X2 action is being implemented inadvertently in spite of Judge Wanger’s best efforts to stop it.  Delta outflow, calculated at weekly and monthly averages, has exceeded 12,000 cfs (PDF), and at these flows X2 will be located at or west of the 74 km mark.  This will probably continue, although the average X2 location may shift a couple kilometers east later this fall.  Given that the Fall X2 action is being achieved anyway without state contractors losing their water supplies, Wanger lifted the injunction through mid-October, but that did not stop him from providing a candidly colorful assessment (perhaps to take advantage of his fast-approaching retirement) of what he deemed to be bad faith on the part of federal scientists testifying in this case.  (For further information, see PLF, KMTG, and Felicity Barringer’s recent blog post at the New York Times.)

It is the case, as water users and their chosen scientist witnesses have pointed out, that the existence of a substantial delta smelt population in the freshwater Cache Slough complex near Liberty Island shifts the habitat index curve up, thus revealing a larger habitat area even when X2 is located east of the Sacramento-San Joaquin confluence: 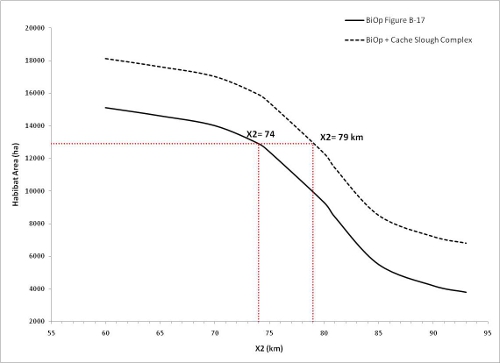 The fact that delta smelt making their home in and around Cache Slough are apparently not tied to the low salinity zone should not necessarily, in my humble opinion, excuse the water projects from providing outflow that pushes the LSZ seaward to the extent that provision of this additional habitat aids delta smelt recovery.  Some research has hypothesized that delta smelt may correlate more strongly with certain water quality parameters at the scale of population subsets inhabiting smaller regions within the Delta, but that the correlation dissipates when evaluated at the scale of the full estuary.  Whether that dynamic is also at play with Cache Slough delta smelt, I could not say, but a finding of this nature suggests that agencies should be prepared to test and implement a diversified arsenal of recovery techniques.  Moreover, increasing delta smelt access to more suitable habitat areas would presumably only help the species become more resilient and improve its chance at future recovery.

Finally, it is worth noting that even though X2 is formulated in terms of an abiotic characteristic, the justification for this action is based in part on how the location of X2 interacts with other factors.  If a particular X2 location directs delta smelt toward more expansive parts of the estuary with abundant prey, less competition for that prey, and more turbid, predator proof waters, then this water quality parameter based only on salinity implicates both abiotic and biotic characteristics.  Although it may not yet be crystal clear (based on any of the models put forward to date) how these and other factors might interact to improve delta smelt abundance, a seaward placement of X2 this fall — as is being achieved in spite of Wanger’s decisions — allows this idea to be tested more robustly, and hopefully will enhance the ability of state and federal agencies to make the science-based water allocation decisions that contractors are supposedly clamoring for. (**)

There is still more to be said on the Endangered Species Act, including Judge Wanger’s final ruling on the salmonid biological opinion, in upcoming posts.

(*) Wanger’s views on the science appear to be evolving, even as his previous, more sympathetic ruling is up for appeal; but these life cycle models were all published after USFWS issued the biological opinion and thus were not available to federal scientists at the time.

(**) Ironically, in one document filed with the court, the State Water Contractors disdain the federal scientists for their support, despite a lack of data, of the “untested hypothesis” that delta smelt would benefit from larger and higher quality habitat downstream — even as the contractors oppose the implementation of an action that would both provide more data and test this “untested hypothesis.”  Now that plaintiffs have demonstrated their insatiable curiosity for scientific pursuits, perhaps we can look forward to their future cooperation.